Home » Multifaith Studies and Initiatives
The Reconstructionist Rabbinical College is a pioneer and leader in multifaith education and engagement. RRC was the first rabbinical seminary to require students to take courses in other spiritual traditions, and our multifaith program remains the most robust of any Jewish seminary. RRC’s multifaith offerings have included student internships in the community, interfaith text study with Jewish and Christian seminarians, and Muslim graduate students; scholarly guest lecturers; and a salon with faith-based social activists. The department has hosted groundbreaking summer retreats for emerging Jewish and Muslim leaders. Shaped by its founding director, Rabbi Nancy Fuchs Kreimer, RRC’s multifaith studies department continues to develop in bold directions. RRC holds multifaith work to be central to the 21st-century rabbinate. Contemporary rabbis serve multifaith families, lead synagogues and other Jewish communities that include Jews and people of other faiths, and work in coalition with other faith communities for social change. At the College, our students acquire knowledge and skills crucial for Jewish leadership in today’s multifaith world.

The opportunity to learn from the courage of leading scholars and social activists opened my heart and mind to the possibility of living together in peace. My multifaith program experiences transformed the theoretical into action.

Rabbi Kreimer is Associate Professor of Religious Studies and the founding director of the Department of Multifaith Studies and Initiatives, where she was ordained in 1982. She also holds a master’s degree from Yale Divinity School and a doctorate from Temple University. With support from the Henry Luce Foundation, Rabbi Kreimer has pioneered innovative community-based learning opportunities for rabbinical students, and their Christian and Muslim peers. Her last project, “Cultivating Character: A Conversation across Communities,” brought together Jewish, Christian, Muslim, Buddhist and Humanist leaders. Her current project (2016-19) is “Campus Chaplaincy for a Multifaith World.” She is a founding board member of the Interfaith Center of Philadelphia, Shoulder-to-Shoulder of the Islamic Society of North America (where she now serves on the Executive Committee), and the Sisterhood of Salaam Shalom (where she continues to serve on the board and conference committee). She recently co-edited Chapters of the Heart: Jewish Women Sharing the Torah of our Lives (Wipf and Stock, 2013) and co-authored Stranger, Neighbors, Friends (Wipf and Stock, 2018).

The multifaith program has given me much stronger tools for discernment — deciding what groups to get involved with, and knowing how to navigate with humility and a sense of spiritual purpose and wholeness. I feel very fortunate.

This course explores the reality of what Diana Eck has called “a new religious America,” a “Christian country that has become the world’s most religiously diverse nation.” Today, more Americans than ever are encountering one another across faith lines. What does this new context mean for the evolution of Jewish identity and Jewish religion? How can religious leaders confront the challenges and exploit the opportunities of this moment? Students will explore theological and sociological theory, and grapple with practical issues through case studies, role-playing, guest lectures, field visits and more. Students will deepen their understanding of the multifaith reality and develop their leadership skills in this context.

A perennial, popular course, “Hevrutah: Jewish-Christian Encounter through Text” is co-taught by Rabbi Melissa Heller (‘08), Director of Admissions and Recruitment, and Professor Robert Robinson of the United Lutheran Seminary (ULS.) This course offers an opportunity for interfaith reflection.

“Arabic for Interfaith Engagement” is a course for teaching elementary Arabic to English speakers who know Hebrew. The method of instruction is based on learning cognate vocabulary — Arabic words that are similar to Hebrew words – adding one letter at a time. Watch a short documentary about this course.

Rabbi as Pursuer of Peace

Guest Rabbis Daniel Roth, director of the Pardes Center for Judaism and Conflict Resolution, and Amy Eilberg, a trained pastoral counselor and spiritual advisor, pioneered this course specifically for our students. Learn more at Seek Peace and Pursue It. Out of this intensive, a partnership grew that gave rise to ongoing programs for Jewish leaders through the Pardes Institute of Jewish Studies. 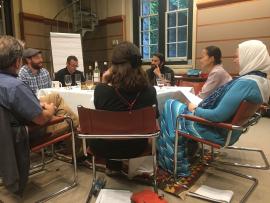 Learning at a Shabbat Dinner
The course has featured partnerships with the Middle East Center at the University of Pennsylvania, as well as a variety of local mosques. We focus on American Muslims today: the diversity of Muslim communities; the unprecedented freedom of American society giving rise to new expressions of Islam; how September 11 and its aftermath have impacted the experience of Muslims; Muslims and U.S. politics; and the evolution of interfaith dialogue.

Cultivating Character: A Conversation Across Communities

This course explores spiritual practices from Christian, Jewish and Muslim traditions based a the model developed at RRC and funded by the Henry R. Luce Foundation.  We learn about practices that different faith-based activists find valuable in cultivating personal traits to sustain their work. Learn more at Cultivating Character.

Praying with Your Legs (Salon Series)

Our multifaith salon brings speakers to the College and the wider interfaith community. Guests have included Ali Abu Awwad, a Palestinian peace activist, and Professor Philip Clayton from Claremont Theological School, who addressed the conflicts and confluence of religion and science.

RRC took the lead in creating an Interfaith Seminary Consortium for the Philadelphia region. The Interfaith Center of Greater Philadelphia is now running the program that brings together faculty and students from the College, neighboring Christian seminaries, and Respect Graduate School, a Muslim institution in nearby Bethlehem, Pa.

Projects for the Greater Multifaith World

Campus Chaplaincy for a Multifaith World

This program builds on RRC’s model of convening emerging religious leaders to share spiritual practices. The goal is to increase the capacities of chaplains of many faiths to nurture and deepen their own moral and spiritual lives; to build relationships with one another; and to encourage productive conversations across differences on college campuses. Campus Chaplaincy for a Multifaith World will ultimately include retreats for 50 campus chaplains representing 25 campuses; campus “initiatives” that the participants will design; webinars; and other resources. With the guidance of our “field shapers,” we will share the impact of the project with the broader fields of theological education, chaplaincy training and college education. Learn more at Campus Chaplaincy for a Multifaith World.