Originally published in the Jewish Exponent on Oct. 8, 2019 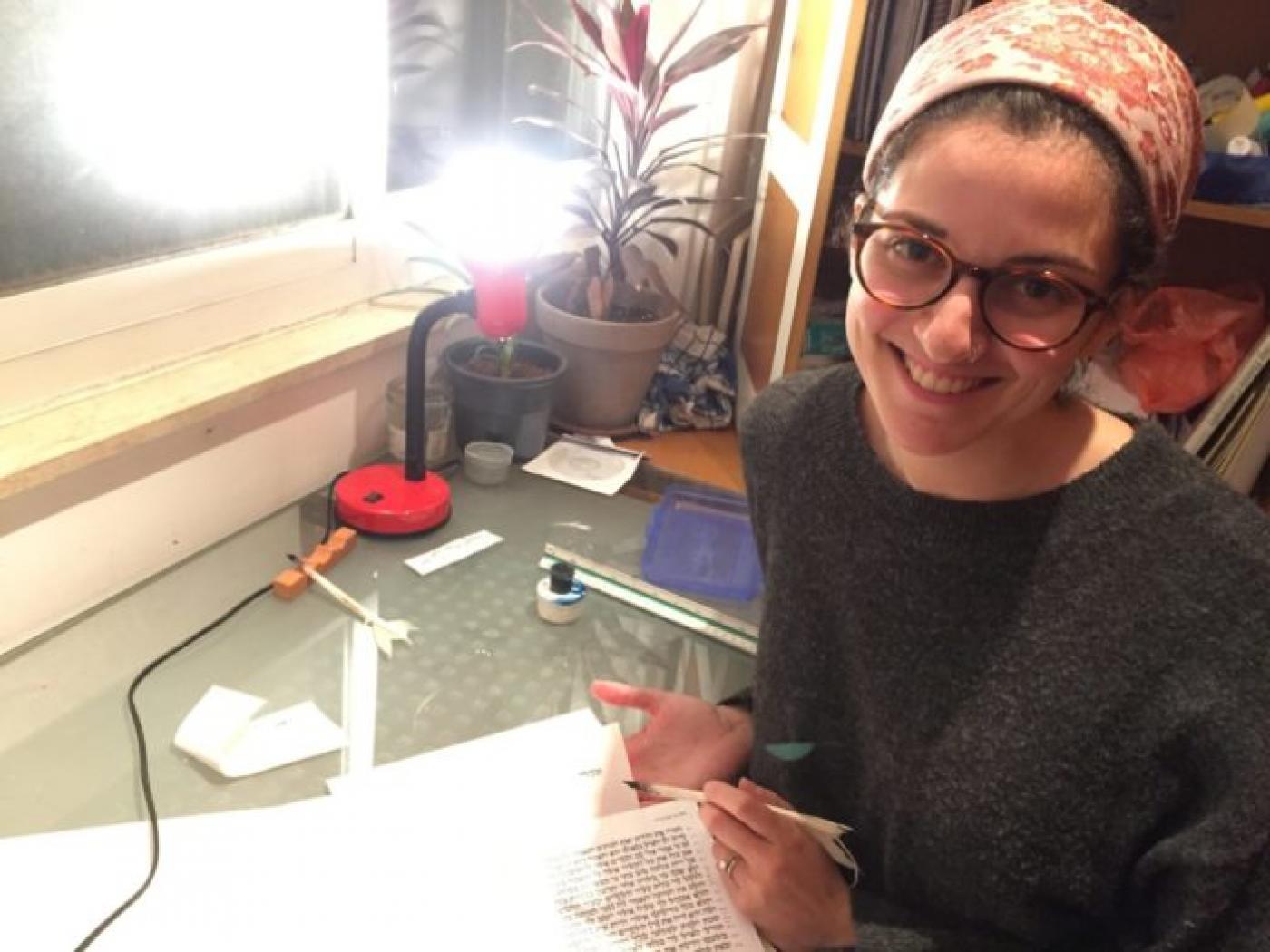 It was never inconceivable that Linda Coppleson would be doing this. At least to her, anyway.

Coppleson, 69, grew up in a shul dedicated to the liberal, progressive German tradition, and became a Bat Mitzvah in 1963, when that was still rare. It was on a Saturday morning, and she chanted the haftarah and read from the Torah scroll. There was never a communal obstacle, Coppleson said, to what has become her chosen vocation: life as a soferet, or scribe.

“I grew up never having that sense that, ‘Oh, this is what girls don’t do,” she said. “I always had the feeling of, if I wanted to do it, I could do it.”

Coppleson, born in Newark, New Jersey, and today living in West Orange, New Jersey, is one of a small but growing number of female scribes, several of whom are concentrated in the Philadelphia area. It is a testament to the tightness of the community of soferot that many of the women who populate Coppleson’s journey to sofrut (the practice of being a scribe, generally) play similar roles in the stories of Rabbi Bec Richman and Sonia Gordon-Walinsky. But we’ll get back to that.

It was not until college, Coppleson said, that she realized that there could even be restrictions on women taking part in the act of writing holy texts. She was a Jewish studies major at Brandeis University and, after school, began to teach in Solomon Schechter schools of New Jersey. Along the way, she started to read Torah more regularly, prompted by her son’s Bar Mitzvah, and also began to lay tefillin and wear tallit.

For years, she studied calligraphy, too, and, in the early 2000s, after decades of teaching, she decided it was time: She wanted to become a full-time soferet.

Easier said than done, of course.

Beyond the difficult, intensive training, Coppleson had problems just finding someone who would teach a woman the craft. She even recalls difficulty in obtaining practice materials. But helped along by caring teachers and other women committed to sofrut — like Rabbi Shane Vay, Jen Taylor Friedman and Linda Moskin, to name a few — she is now a full-time soferet, writing sifrei Torah and making repairs, among other tasks.

“Women can often feel detached and marginalized from ritual aspects of their lives,” Coppleson said. “To see a woman do this work. … It’s very eye-opening for people.”

It’s certainly been eye-opening for Richman.

Richman, 28, a graduate of the Reconstructionist Rabbinical College, looked up to soferim and rabbis and from a young age. It just didn’t seem like either one would be a viable path for a woman to take.

“I didn’t think that either thing would be possible,” she said.

Like Coppleson, her journey to sofrut was propelled by an interest in calligraphy, in addition to the religious aspects. She faced obstacles along the way, too; she is left-handed, for starters. Contrary to what you might believe, with Hebrew being written right-to-left that actually makes things more difficult. Most instructions for soferim are created for right-handed people.

Besides the mechanical issue, she too took time to find someone who would teach her, and when she did find dedicated teachers, she thrived under their tutelage.

Richman feels that there is a tension in her understanding of her craft. On one hand, it does feel “powerfully subversive” to do something denied to women for centuries; on the other hand, she does find meaning in tradition.

“It both feels subversive and it feels like no, because this is just what I’ve been commanded,” she said. Ultimately, tension or not, the end result is worth the complexity.

“As a soferet and as a rabbi and as a builder of a beit midrash,” she said, “what’s exciting to me is bringing people close to Torah and empowering people to feel like they can do what our tradition has invited us to do.”

Around the time that Coppleson decided to become a full-time soferet, Gordon-Walinsky was just beginning to enter the world of calligraphy.

Gordon-Walinsky, 27, grew up in the Germantown Jewish Centre and, from a young age, understood that she could forge her own path in Jewish practice, and not worry too much about gender roles.

“It’s very obvious to me that women would be involved in [sofrut],” she said.

Gordon-Walinsky applied for and was accepted to the now-defunct Drisha Arts Fellowship in New York at a time when Jen Taylor Friedman was part of the program. Friedman is a bit of a legend in these circles; she is, as far as anyone knows, the first woman to complete a Torah scroll in contemporary times. It was an exciting period for Gordon-Walinsky.

The excitement came from the text. The textual richness of sofrut — if you meet Gordon-Walinsky, ask her about how the letter bet came to be, according to the rabbis — appealed to her greatly, and continues to do so.

Like Richman, she is interested in engaging tradition in a modern way. But beyond the abstract, it comes down to a simple fact: She enjoys the work.

“It’s sort of like prayer,” she said. “I’m attracted to the discipline.”

Gordon-Walinsky’s work as a soferet has largely been confined to mezuzot thus far (she does sell her calligraphy online), but she hopes to do more in the future; like Coppleson, she’s done work in Torah restoration.

“It’s just an exciting time to be a woman soferet,” she said, “to be included in this tradition that women have been excluded from for so long.”