By Gabrielle Pescador; Photo: Rachel Forth 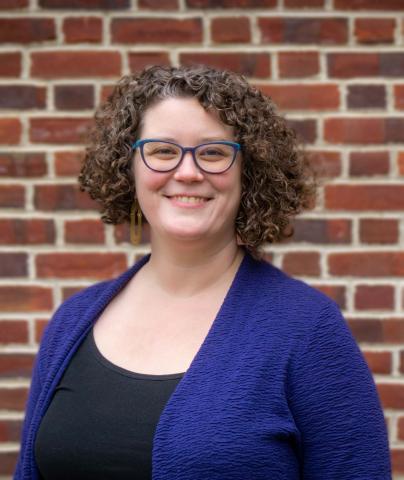 Rabbi Miriam Geronimus, who grew up and lived in Ann Arbor until graduating high school, became a rabbi on May 23 at the 49th commencement ceremony of the Reconstructionist Rabbinical College outside Philadelphia. In her early years Geronimus attended the Jewish Cultural Society, the Secular Humanistic Jewish congregation in Ann Arbor which sparked within her a love for Jewish history and culture.

Having been raised in a family with both parents working as professors at the University of Michigan, Geronimus combined her academic orientation and love of the natural world to pursue studies in ecology and evolutionary biology. She took a special interest in the effects of climate change on the coral reefs, which was the subject of her senior thesis at Princeton and led her to explore this relationship more deeply in a PhD program in biology. Her intention was to make a difference in the conservation of coral reefs through her experiments and scholarship, but soon into her graduate work she realized that lab work and focusing on minute details was not for her, and she started to push away from science. At the same time, she was slowly being pulled toward the rabbinate.

As a way of maintaining her strong connection to Judaism on campus, Geronimus was involved in Hillel where she took on a leadership role in organizing an LGBT group. For one event, she invited a lesbian rabbi to share the experience of living as a Jewish queer person committed to Judaism, embracing its richness while navigating and wrestling with its complexities and challenges. Geronimus was deeply moved by the rabbi’s ability to hold space for students who came from diverse backgrounds and points of view, some strongly identified as Jews and others exploring their Jewish roots. Geronimus found it healing to participate in an encounter in which each individual was seen in their fullness and respected for the way they want to show up in this world, with all their questions, reservations, feelings of disconnection, and deep yearnings.

The experience left Geronimus with a “gut feeling” about the rabbinate. She began to imagine a new path for making a difference outside the sciences, where she could “help people be seen and figure out how to be seen in the messy world.” She did not make the decision to leave the sciences immediately but spent a year of hard discernment regarding her academic identity. But once she made the decision to make the change and become a rabbi, she didn’t doubt it or regret it.

Geronimus chose to pursue rabbinic studies at the Reconstructionist Rabbinic College because of its combined focus on Jewish history, culture, and spirituality. As a longtime spiritual seeker with an academic orientation, she found the rabbinic program that would work for her. She particularly appreciated the RRC’s emphasis on practical rabbinics.

In fulfilling the required internships each year, Geronimus served at several synagogues, a Jewish continuing care retirement community, a campus Hillel, as a hospital chaplain, and as a Hebrew school teacher. The relationships that developed from these experiences were particularly enriching and meaningful and allowed her to “journey with individuals in their Jewishness and their lives in general.” She also appreciated that in her internships she had the opportunity to work with people of all ages and in a variety of settings — with 4th graders, college students, elderly people, and people in all stages of life in congregational environments.

On her path as rabbi, Geronimus aims to continue to work with people of all ages and diverse backgrounds, a deep value that is behind the creation of her latest venture for ensuring inclusiveness in the Jewish world. During the pandemic, Geronimus became the founding rabbi of the Cleveland Jewish Collective, a new progressive Jewish community in Cleveland. CJC is committed to “growing a community that reflects and celebrates the diversity of the Jewish people and fellow travelers.” The choice of the word “collective” instead of “congregation” was very intentional as participants are building the community together and are drawn or “collected” from different parts of the Cleveland area.

Having lived in Cleveland three years before starting rabbinic school, Geronimus saw the need for something new and more progressive in the city. She recognized that although Cleveland enjoys a vibrant Jewish community with several amazing Jewish institutions, there are a number of groups of Jews whose needs are not being met and who feel left out, namely millennials, queers, people of color, interfaith families and those with very progressive political views. Such Jews don’t feel that they can fully be themselves when they show up at a synagogue.

Geronimus wants to create a community where people are appreciated for who they really are, where they have a safe space to wrestle with and figure out “how do I want to live in this world,” and given that, “how do I interact within the diversity of the community.” The people who participate in the Cleveland Jewish Collective “want to dig into Black Lives Matters” and “be involved in the larger conversations happening in this country” as a Jewish community. Geronimus wants to create a place that feels like home for people who didn’t feel like they had a Jewish home before, which “has to be done in conversation with all the perspectives in the mix. We are creating as we go.”