Originally published in The Philadelphia Inquirer on June 27, 2019. 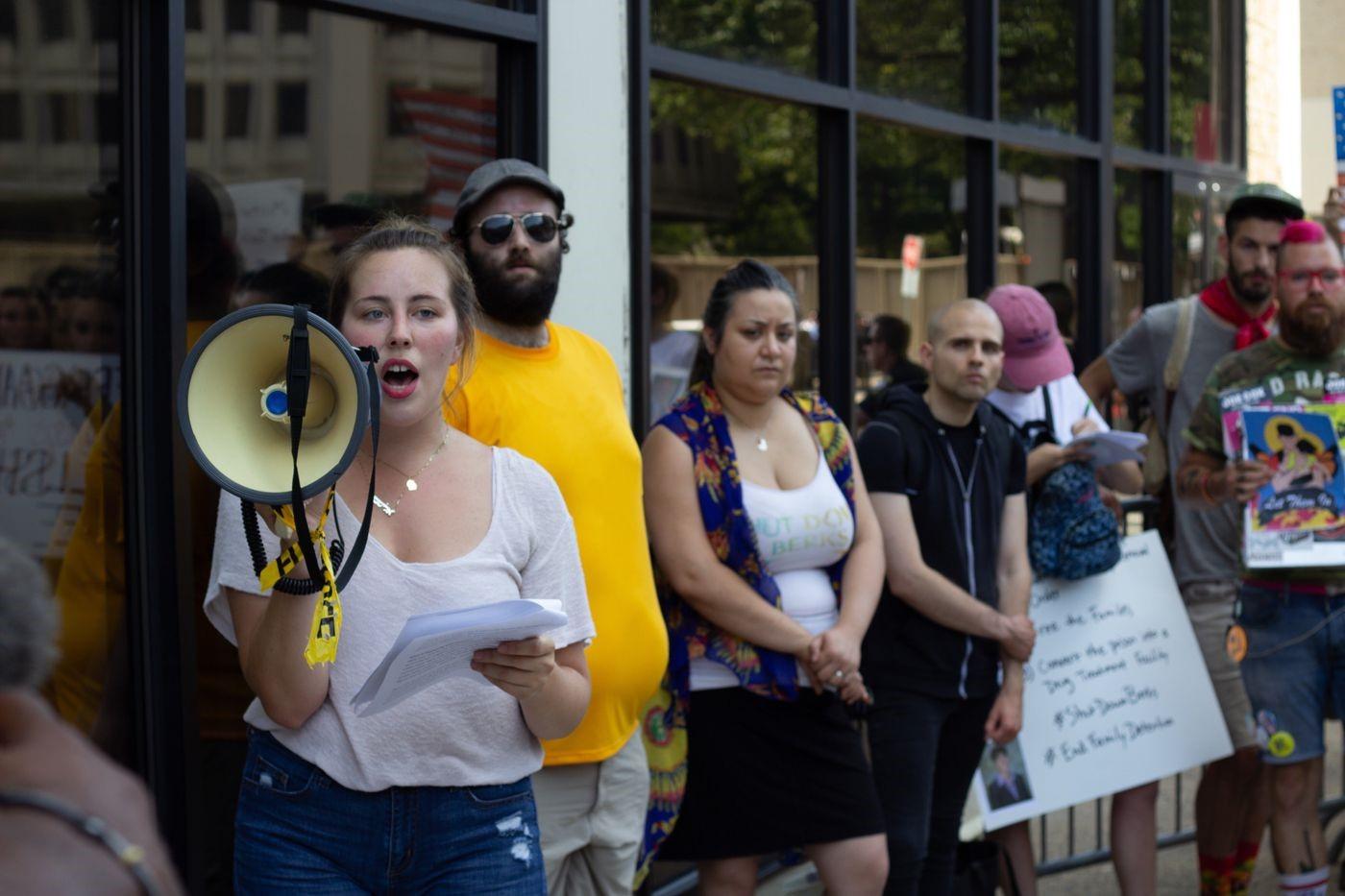 This July Fourth was an emotional day for Lizzie Horne, as the 28-year-old Philadelphia rabbinical student led a protest of nearly 400 people who snaked through the streets of the city, demanding the closure of the concentration-camp-like detention centers on America’s southern border and the abolition of U.S. Immigration and Customs Enforcement, or ICE.

“I was MC’ing, and I had my ‘action face’ on, feeling strong,” she recalled of the protest, organized through Never Again Action. “I rarely break down, but I really had to hold it together when I talked about people who took risks at the time of the Holocaust.” In the back of Horne’s mind were her own loved ones who experienced the Nazis’ lethal reign of terror against Jews during World War II, including her great-uncle who lost his entire family in Hitler’s death camps and her fiancée’s Grandma Rose, who barely escaped Auschwitz with her sister after other family members, including their mom, were killed.

Moments later, 33 predominantly Jewish protesters sat down in front of Independence Hall and were arrested for blocking the annual July Fourth parade, exactly 243 years after the Founding Fathers declared that all humans “are endowed by their Creator with certain unalienable Rights.”

The day was another milestone for a pop-up protest movement that is arguably among the most exhilarating and morally compelling of the Trump Era: Young Jewish activists convinced that the gulag of squalid, overcrowded “dog pounds,” warehouse cages and tent cities for refugees trying to enter the United States at the Mexican border is a slippery slope toward something even worse, unless everyday Americans take radical actions to stop it.

On Tuesday, Never Again Action took to the streets in front of ICE headquarters in Washington, D.C., to stage what organizers hope will be the group’s biggest action yet. Already, the ad hoc movement has made headlines with daring actions from Elizabeth, N.J. — where 36 protesters were arrested for blocking an ICE facility as some wore prayer shawls or blew into shofars, a traditional Jewish horn — to San Francisco. At least 120 have been arrested nationwide, and leaders say this is just the start.

Horne, a native of suburban D.C. who just finished her first year at Reconstructionist Rabbinical College in Wyncote after a stint as an activist and organizer in New York, believes there’s what she called “a moral duty” for a budding Jewish faith leader such as herself to speak out against a modern-day atrocity that seems to echo the beginnings of a 20th-century catastrophe.

“I think from a Jewish perspective it is just so reminiscent of what may of our ancestors went through,” Horne told me Monday night as she readied to take part in the D.C. protest. “These detention centers are alarmingly close — in image and in operation — to concentration camps. The lack of resources. No food. Not being able to shower. No toothpaste. People dying… We should not allow history to repeat. We’re not doomed. We have an opportunity to change it.”

The protests are coming at the most perilous moment for the American Experiment at least since the conflicts over Vietnam and civil rights in the 1960s, and arguably since the Civil War. Among the half of America that bitterly opposes the Trump presidency, anger is mounting over conditions in the camps — especially since the stunning images Friday night of Vice President Mike Pence touring a grossly overcrowded facility near McAllen, Texas, crossing his arms dispassionately as men packed tightly together behind a wire fence screamed that they hadn’t showered in as long as 40 days.

At the same time, the president announced with great fanfare (but, so far, with little follow-through) that ICE would begin systematic raids in immigrant neighborhoods in at least 10 major U.S. cities, spreading fear among both the undocumented and their friends and family members. And on Monday, Trump announced a new scheme to shut down asylum seekersfleeing murder, rape and repression in Central America — the latest White House attempt to define downward the once-cherished notion of America as a global beacon of freedom. For some, it’s a bridge too far. Horne said more than 100 people volunteered for the July Fourth protest within minutes of posting the event on Facebook.

One who answered the call was Sarah Giskin, a 25-year-old community organizer living in Strawberry Mansion. She said many people were energized by the debate that was triggered when first-term New York City congresswoman and media sensation Alexandria Ocasio-Cortez called the migrant detention centers “concentration camps.”

“That was really enraging,” Giskin — who marched on July Fourth but like Horne was not one of the 33 who were arrested — told me, referring to the backlash against Ocasio-Cortez. “First of all, clearly they’re concentration camps — because people are being rounded up and sent to camps in close quarters and denied human rights. But it’s also a way to deflect, by trying to debate what to call the camps — what words — instead of what is happening there.”

Like others in the Never Again Action movement, Giskin grew up (in Connecticut) attending Hebrew school, studying for her bat-mitzvah — and internalizing that a “Never Again” approach to human-rights violations is a part of what it means to be a modern Jew. She added, “No one I ever met applied that as only applying to Jewish people.”

That’s why the pushback from some of the established mainline Jewish organizations — including the American Jewish Congress and the D.C.-based National Holocaust Museum — who have rejected any comparison between American border camps and Adolf Hitler’s atrocities has been somewhat dismaying for the young activists.

A historian affiliated with the Holocaust museum wrote in a statement that [i]t is all too easy to forget that there are many people still alive for whom the Holocaust is not ‘history,’ but their life story and that of their families. These are not abstract tragedies on call to win an argument or an election.” The National Council of Young Israel said comparisons to the Holocaust “cheapens the memories” of the 6 million who died in Europe in the 1940s.

Horne said that as a future rabbi she surely understands “the generational trauma” suffered by Jews who survived that era and how the Holocaust became associated to some degree with preserving Judaism and its culture, but she also called it “infuriating” that some would deny applying the lessons of that era to a modern-day humanitarian crisis. Indeed, hundreds of Jewish and Holocaust scholars criticized the D.C. museum — whose chairman is a longtime Trump ally — for its stance.

The irony is that you could argue the remarkable success of Jewish educators and community leaders — even some who would deny the comparison to Trump’s detention centers — in keeping the memory of the Holocaust alive is what inspired this new generation to lay down in the streets.

Meanwhile, activists with the Never Again Network say it could be a long hot summer as horror stories and shocking images beamed back from the border in Texas and Arizona continue to only get worse. “This is not a casual thing,” Giskin said. “This is a crisis. Children are dying because they didn’t have water.”