Rabbi Amy Bernstein, ’97, Chosen to Lead SoCal Board of Rabbis

This article was originally published at this link on Jan. 20, 2019 in Circling the News.

KI’s Bernstein Now President Of The Board of Rabbis 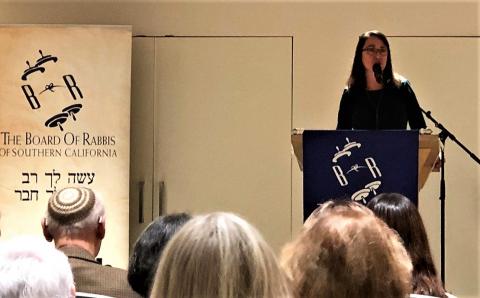 Rabbi Amy Bernstein was installed on January 16 as the president of The Board of Rabbis of Southern California for a two-year term. The installation ceremony was held at Kehillat Israel, and attended by two hundred congregants, community members and supporters.

According to the The Board of Rabbis website, the board seeks to promote and nurture the growth of rabbis on both spiritual and professional levels, foster a sense of Klal Yisrael among the different denominations, and serve as a resource for the Jewish Federation of Greater Los Angeles in its work to engage, care for and ensure the future of the Jewish People.

Bernstein has been the senior rabbi at Kehillat Israel since 2014.

Her father came from an Orthodox family but was not an observant Jew and her mother was a southern Baptist, who converted. In an interview Bernstein said, “The irony of growing up that way was that I understood there were lots of ways into Jewish identity and practice.  I went to a Jewish Day School, so I got my sense of Jewish identity from my father and his family, and school, and my sense of Jewish practice from my mother.”

Bernstein attended Northwestern College, graduating with a double major in English literature and anthropology. After college, she moved to Atlanta where she attended a Reconstructionist synagogue.

In an interview, she said, “I was welcomed and brought in.  The rabbi was female and was able to perform all the rituals, wore the kippah and prayer shawl, which was not what I was used to from Orthodoxy and Conservative practice.  She was also was tone deaf, couldn’t carry a tune, so when she learned that I could read Hebrew and I knew all the prayers, and could also chant, she asked me to be Cantor for Yom Kippur services.  This the first time I had ever heard a woman’s voice chanting Kol Nidre, the most moving and symbolic piece of music in our liturgy, and it was my own voice.”

Bernstein chose to go to Rabbinical Reconstructionist College in Philadelphia. Her rabbinic training included one year as a visiting graduate student at Ben Gurion University of the Negev in Israel. Afterwards, she went to Duluth as the visiting student rabbi Temple Israel and stayed for 14 years until she got the offer from Kehillat Israel in 2010.

When Bernstein was a rabbinical student, she met KI’s Rabbi Sheryl Lewart. Bernstein knew that Lewart was going to retire and that she would be in line to be senior rabbi when Rabbi Steven Carr Reuben retired. “I asked her if she thought KI would be ready for an openly gay woman senior rabbi. She said yes, and I applied.”

Rabbi Bernstein makes her home in Pacific Palisades with her partner, Judy Griffith, her daughter, Eliana, and their rescue Chihuahua, Olivia.