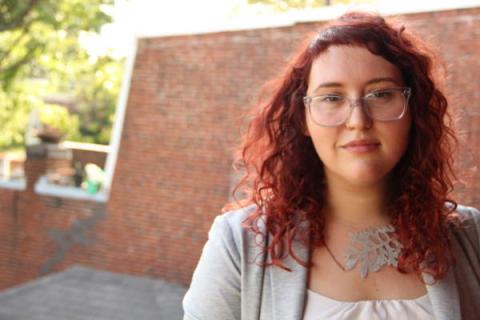 The first thing you should know about Rabbi Ariana Katz is that she’s a total badass. She’s a founding rabbi of Hinenu: The Baltimore Justice Shtiebel, a radical Jewish collective (check out their website). She’s worked at T’ruah: The Rabbinic Call for Human Rights and even as a chaplain at Planned Parenthood.

I got the chance to talk to Katz on the phone about something we have in common (besides being Jewish): podcasting.

Back in 2016, Katz wanted to make a podcast that was “death positive and queer affirming.” “There was a real audience hunger,” Katz says, “to talk about something something so difficult for so many people.”

The final product, “Kaddish,” is all about dying and who we are when we die. It’s a one season, 9-episode long deep-dive into Judaism and death rituals. Katz always mentions the teachers who inspire her. In this case, it’s Rabbi Linda Holtzman, a super-awesome Jewish feminist thinker who founded the Reconstructionist Hevrah Kadishah of Philadelphia, a Jewish burial society.

In “Kaddish,” Katz brings us the stories of people working around death, which she hopes will help undo the stigma around death. “In the era of mass incarceration, and death-causing institutions, we need to talk about what death means, and the palpable silence surrounding it.”

The question on my mind is: why podcasting? Katz is already a rabbi. Why take the issues she’s passionate about to the airwaves?

We joke a little bit about how podcasting connects with “the youth.” She says, “You need to meet people where they are. Coming from a place of love and respect…some people aren’t ready to have these conversations in synagogue. Religious institutions can carry a lot of trauma.”

I realize, hey, I might be the target audience. I’m Jew who doesn’t go to temple, like, ever. It’s not that I’ve had a traumatic experience with religion. I was raised without a large Jewish community. Because of this, I sometimes don’t feel Jewish “enough.” I know I’m not alone in this feeling, and so does Katz.

“If the only thing this podcast accomplishes is to have someone resist saying even one time ‘I’m a bad Jew’… then it will have been a success. Rule #1: there is no such thing as a bad Jew.”

This is one of the opening lines in “Thread,” Katz’s new podcast project that dropped this March. “Thread” is in the same spool at “Kaddish” (ha) because it’s inspired by questions from Katz’s community. But the content is more expansive. Each episode deeply and honestly explores a listener question regarding Judaism. Right now, two episodes are out. Katz says more are on the way.

Episode one of “Thread” is called “How do I pray if I don’t believe in G!d?” Katz talks about strategies for being Jewish without believing in a patriarchal and hierarchical god-like entity. You should totally check it out. The writing is rich in metaphor and meaning, and it totally speaks to non-believers like me.

The literary and mythic world is full of thread metaphors – think the three fates, or Penelope weaving and un-weaving Odysseus’s burial shroud. In the same vein, Katz uses the image of thread in Judaism to conjure this feminist idea of stitching our own histories.

“Thread because our stories are stitched together by tradition, by innovation, by historical moves and personal values. Because the threads that weave together Jewish life and practice are varied and beautiful…The metaphor just works.”

Discovering “Thread” was basically like discovering a cool, young rabbi that I can summon who validates all of my complicated feelings about religion. It’s truly some next-level stuff.

On her website, Katz writes that Judaism has “a lot of KNOWLEDGE.” But Katz is committed to helping us understand – not drown – in that well of knowledge. She says information needs to be “given back to the people.” Katz adds, “I’m an anarchist feminist figuring out how to wield power generously and ethically.”

Podcasting is (or can be) one of the most democratic ways to distribute knowledge. It’s clear that radical conversations about Judaism don’t have to happen inside synagogue walls, discussed by “experts.” You can understand a well-made podcast with little prior knowledge. Katz even has all her episodes transcribed so hard-of-hearing and deaf folks can tune in.

Technology is expanding our ability to connect beyond a physical gathering space. Podcasting proves that our Jewish community can be both space-specific and expansive. For me and so many others, it’s becoming a new Jewish ritual.

The best radio lets us look into new worlds that are hidden in plain sight. It reminds us that we are always connected. Jewish podcasting interweaves interested, amateur Jews like myself to awesome professional Jews like Katz, and so much more.

In her pilot episode of “Thread,” Katz says “G!d loves what is on the margins.” This idea evokes a radically inclusive vision of what Judaism can be. Katz reminds us of the threads of Jewish life that often get brushed over: the experiences of queer Jews, Jews of color, and atheist Jews.

“When I teach [and when I make podcasts] it doesn’t feel like different parts of me,” Katz says. Katz brings her whole, complicated self to her work, offering “questions and sometimes answers.” She’s carving out a new space for Jewish life to thrive on the margins.

Ariella Markowitz is a senior audio storyteller at Williams College, studying English and political science. She makes radio for WCFM and Williams’ Center for Environmental Studies, and is a proud past-intern at Association of Independents in Radio (AIR). You can find her arranging Björk songs for jazz combo and trying to discover the next big indie podcast.