Originally published at Tablet Magazine on 6/19/2018 as http://www.tabletmag.com/scroll/264635/one-rabbis-bipartisan-spiritual-quest-end-corruption-in-pennsylvania by Frances Madeson 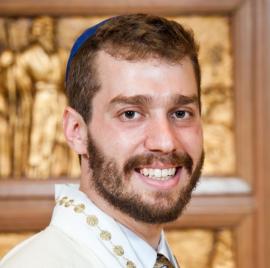 Reconstructionist Rabbi Michael Pollack’s kippah is purple — bipartisan by design — mixing red and blue because when it comes to political bribery in Pennsylvania, a state that ranks in the Center for Public Integrity’s top 10 corrupt states, Republicans and Democrats are equally culpable.

“In our 2015 rankings Pennsylvania was one of a group of states that got an F grade,” said Gordon Witkin, CPI’s executive editor. “We found overall that there was an absence of effective ethics at the state house, flaccid anti-corruption laws, not a lot of oversight of lobbying and that a culture of corruption had grown up around all the malfeasance which is a regular part of the Harrisburg diet.” Witkin said that in their reporting it was found that 40 state officials or high-ranking aides had been convicted for crimes of corruption in the past four decades.

“It’s a culture that incentivizes bad behavior at every single turn,” says Pollack, who is the founder of March on Harrisburg, an anti-corruption pro-democracy organization committed to moving the Commonwealth from its embarrassingly low rating to the very highest. Pollack says that to the detriment of good governance both sides play the gerrymandering game and unapologetically accept gifts from lobbyists. “One Democratic legislator told me: ‘I depend on gifts to pay my mortgage,’” Pollack said.

Astonishingly, in Pennsylvania this is not an admission of wrongdoing. It is one of only 10 states with no limitations on what people can gift to politicians. While Gov. Tom Wolf’s office is under a self-imposed gift ban, members of the state legislature are not. Rep. Greg Vitali has linked the inability to pass meaningful environmental protections to the 203 lobbyists employed by the oil and gas industry (a 1:1 ratio with state reps), who expense $7 million to $8 million each year lobbying.

“You can gift anything, there are no limits,” Pollack explained. “And the reporting requirements are a joke, there’s no enforcement. Legislators can receive new cars, vacations, even cash gifts are legal. A lobbyist can literally walk into the statehouse with a briefcase full of cash.”

Under the green glaze of the capitol’s domed roof the business of the state is conducted in an atmosphere begging for an infusion of morality. Pollack, who says that he’s “much better at lobbying corrupt politicians than leading services,” has been in every nook and cranny of the palatial building, including multiple detentions in its holding cell after engaging in civil disobedience meant to advance MoH’s legislative agenda — an end to gerrymandering and a gift ban.

“They’re afraid of us,” he said, “because we’ve made our deal fairly clear—if you meet with us we won’t protest you, if you don’t, we will.” Only three of the 253 legislators have not yet met with MoH, most notably Rep. Daryl Metcalfe who holds power as majority chairman of the House state government committee.

Of most urgency to MoH is Metcalfe’s refusal to meet with its members to discuss a gerrymandering reform bill. HB 722 is still stuck in the state government committee chaired by Metcalfe, even after MoH walked 105 miles from Philadelphia to urge that it be brought for a vote. Bearing gifts of Champagne, candy and flowers, Pollack even offered Metcalfe the shirt off his back, stripping down to his tzitzit as an inducement for a conversation. If it is not voted on by June 30, its measures (which were endorsed by Metcalfe’s own district of Cranberry Township in a resolution) will not be eligible to be placed before voters in a referendum before the next round of redistricting in 2021.

Metcalfe did not directly respond to Tablet’s request for comment, but did publish a video disparaging MoH on his website the very next day.

Undeterred, Pollack notes that while that culture of corruption “runs deep,” so does the tradition he’s calling on to root it out.

Inspired by prophets, not profits, Pollack reads the entire Hebrew bible as a testament to how wrong bribery and corruption are. Passages from Exodus, Deuteronomy and Isaiah fall trippingly off his tongue—“a bribe blinds they eye of the wise and distorts the words of the righteous; your rulers are rebels they chase after thieves”—which he sees as warnings about the hazards of shutting out the voices of the marginalized.

“When there’s a disconnect between those that govern and the people there is chaos and suffering; it directly affects us when Pennsylvania doesn’t have money for basic social services because Comcast doesn’t pay taxes, or when the air and water are poisoned.”

Trained at the Reconstructionist Rabbinical College, seminary prepared him for this work not only scripturally but temperamentally.

“At RRC I learned how to meditate to have a clear mind, to check my own ego and reactions, and to form and articulate a more or less consistent world view, with tons of doubt and contradictions built in, of course.”

If a secular approach could get the job done Pollack might’ve become a lawyer instead of a rabbi, but educating people to the problem of corruption alone is insufficient. Polling shows that 96 percent of those asked want to change the way elections are funded, but also that 91 percent don’t think anything will ever change. Pollack is bringing what he calls “an irrational spirituality” into the discussion about money in politics, which he feels is dominated by “hyper-rational cynicism.”

For that reason he says it was a “no-brainer” to join in a “moral fusion” under the umbrella of the Poor People’s Campaign into a coalition with Movement of Immigrant Leaders in Pennsylvania and the Coalition to End Death By Incarceration — an organization working to end Life Without Parole in Pennsylvania. On May 21, Pollack along with five other rabbis, including Mordechai Liebling, director of RRC’s Social Justice Organizing Program, were arrested at the state capitol.

Rabbi Pollack is unconcerned that “moral fusion” might be interpreted as a dilution of the precepts of Judaism. He’s been inspired by the writings of Shalom Center founder and director Arthur Waskow on the long traditions in Judaism of both disobedience and nonviolent direct action, and especially draws on the wisdom of Rabbi Abraham Joshua Heschel from whom he received three key concepts: No religion is an island, we live in an interconnected world, and it’s an issue of pragmatism at the end of the day.

“Intersectionality is building that beloved community,” said Pollack, “even if we only agree on 20 percent of issues.”

Pollack does not treat corrupt Jewish legislators any differently than non-Jews.

“But I carry more disappointment,” he admitted. “I expect more from them, whether that’s fair or not is a different question.”