Rabbinical student, May Ye, led a workshop on improving racial equality in Judaism 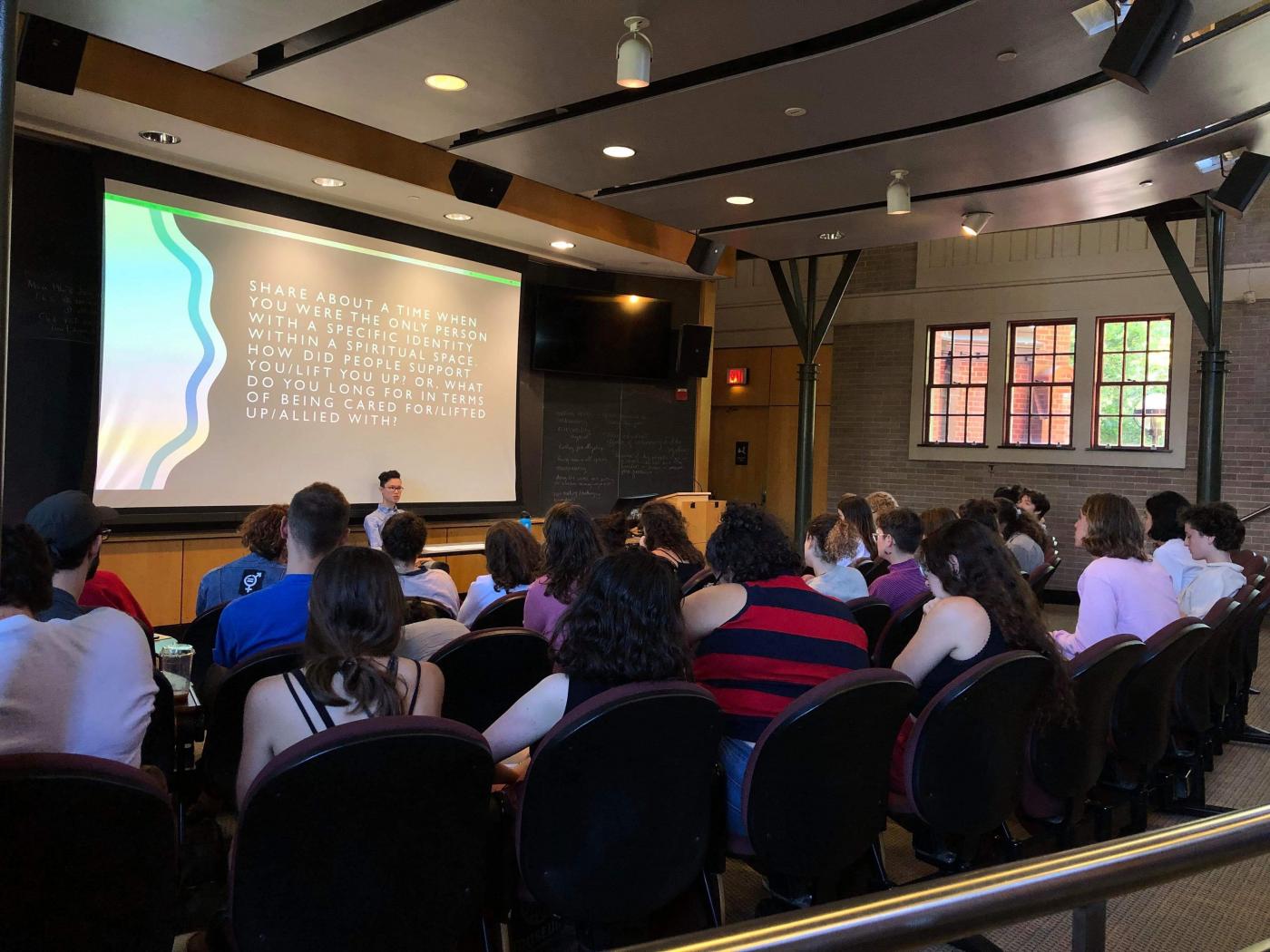 Over 80 Jewish students from 27 schools across the country flocked to Brown’s campus for the 2019 Judaism On Our Own Terms conference this weekend, where attendees participated in a collection of workshops and discussions aimed at building diverse and student-run Jewish communities on college campuses nationwide.

JOOOT — a national student-led network of independent Jewish groups — launched in May 2019 with the aim of connecting students who feel the need for entirely student-led alternatives to Hillel on college campuses. Groups associated with the network commonly have an explicit focus on political and ethnic diversity. Brown’s own Friday Night Jews, a student-run discussion group independent of the University, is part of JOOOT’s network and hosted this year’s convention.

Hal Triedman ’20.5, an FNJ organizer for the JOOOT conference, hopes that the network will help students create spaces on their campuses for Jewish students who “have felt alienated or disconnected from their Judaism because of their political beliefs, sexual orientation, race or ethnicity,” he said. Elisheva Goldberg ’22 was the lead coordinator for the conference.

Triedman emphasized that while Brown/RISD Hillel was not involved with FNJ in the organization of the JOOOT conference, the student leadership of the two groups overlaps. FNJ members consistently communicate with the rabbis and executive director at Brown/RISD Hillel, Triedman said. “(Brown/RISD) Hillel has been a really useful partner in the dialogue that has existed on Brown’s campus,” he added.

“Brown/RISD Hillel is deeply committed to the values of inclusivity, pluralism and student leadership,” Bolton wrote in an email to The Herald. “Hillel is a platform for student creativity and innovation — a center where every Jewish student on College Hill is invited to apply his or her own knowledge and entrepreneurial spirit toward tackling the greatest challenges facing our Jewish community in 2019.”

JOOOT is an initiative of Open Hillel, an organization critical of Hillel International’s official guidelines called “Standards of Partnership for Campus Israel Activities.” These standards exclude “groups from the Jewish community on campus on the basis of their views on Israel,” according to Open Hillel’s website.

Isaiah Milbauer, a sophomore at the University of Chicago who attended the convention, said that JOOOT is not opposing Hillel, but rather “offering another option … another place that Jews can find a home on campus.”

Livia Kunins-Berkowitz, a sophomore at Bowdoin College, joined the JOOOT conference to find a space where she felt comfortable discussing her political perspective.

“We just have a Hillel right now, and it’s not particularly political,” she said. “I feel critical of (Israel’s occupation of Palestinian territories), and want Jewish spaces where I feel really comfortable voicing that.”

In addition to its ideological and political objectives, JOOOT’s mission includes explicitly welcoming Jewish students who also identify as LGBTQ+ students, students of color and students who are part of other underrepresented groups in the Jewish community in the United States.

On Sunday, May Ye, a student studying at the Reconstructionist Rabbinical College, led a workshop on improving racial equality in Judaism. During the workshop, Ye led discussions on the intersection of social justice and spiritual space, and how to honor the wide variety of ethnic backgrounds that exist in Judaism. Ye shared her own struggles with racism in college as a Jew of color, and emphasized that in any Jewish gathering people must always be cognizant of “who is in the room,” and how they can feel included.

“We can’t ignore the fact that Jewish identity isn’t just white, European immigrants,” Triedman said, referring to Ashkenazi Jews, who make up the majority of the Jewish population in the United States. He emphasized the importance of highlighting the Jewish diaspora and the variety of Jewish cultures that exist today, like those found among Sephardi, Mizrahi and Ethiopian Jews.

The conference began with a Friday night dinner and discussion, much like FNJ’s own biweekly dinners. On Saturday and Sunday, attendees were invited to participate in a number of workshops on organizing spiritual community groups, and the interaction of Judaism with social justice. Representatives from Boston’s Kavod House, a Jewish community group oriented toward social justice, led a discussion on how to build lasting, socially-active organizations within the Jewish community. JOOOT also created and distributed its own “how-to guide” on starting independent Jewish communities.

Milbauer hopes to use the knowledge he gained at JOOOT’s conference to create “Jewish social communities that also have a progressive commitment” at his home school of UChicago, similar to FNJ. “Friday Night Jews was built by the young people here on campus … out of their vision and out of their love for (their Jewish) identity,” Milbauer said.

“At my (own) university, I didn’t really have a strong sense of Jewish community,” said Zmira Stouber, a senior at the University of Vermont. But having attended the convention, “I’m learning that I’m not alone, and there is a community around me.”