Originally published in The Times of Israel on June 23, 2020.

In the middle of the Capitol Hill Occupied Protest (CHOP), a cadre of rabbis hold a havdallah service, foster interfaith community, and try to make spaces welcoming to all Jews. 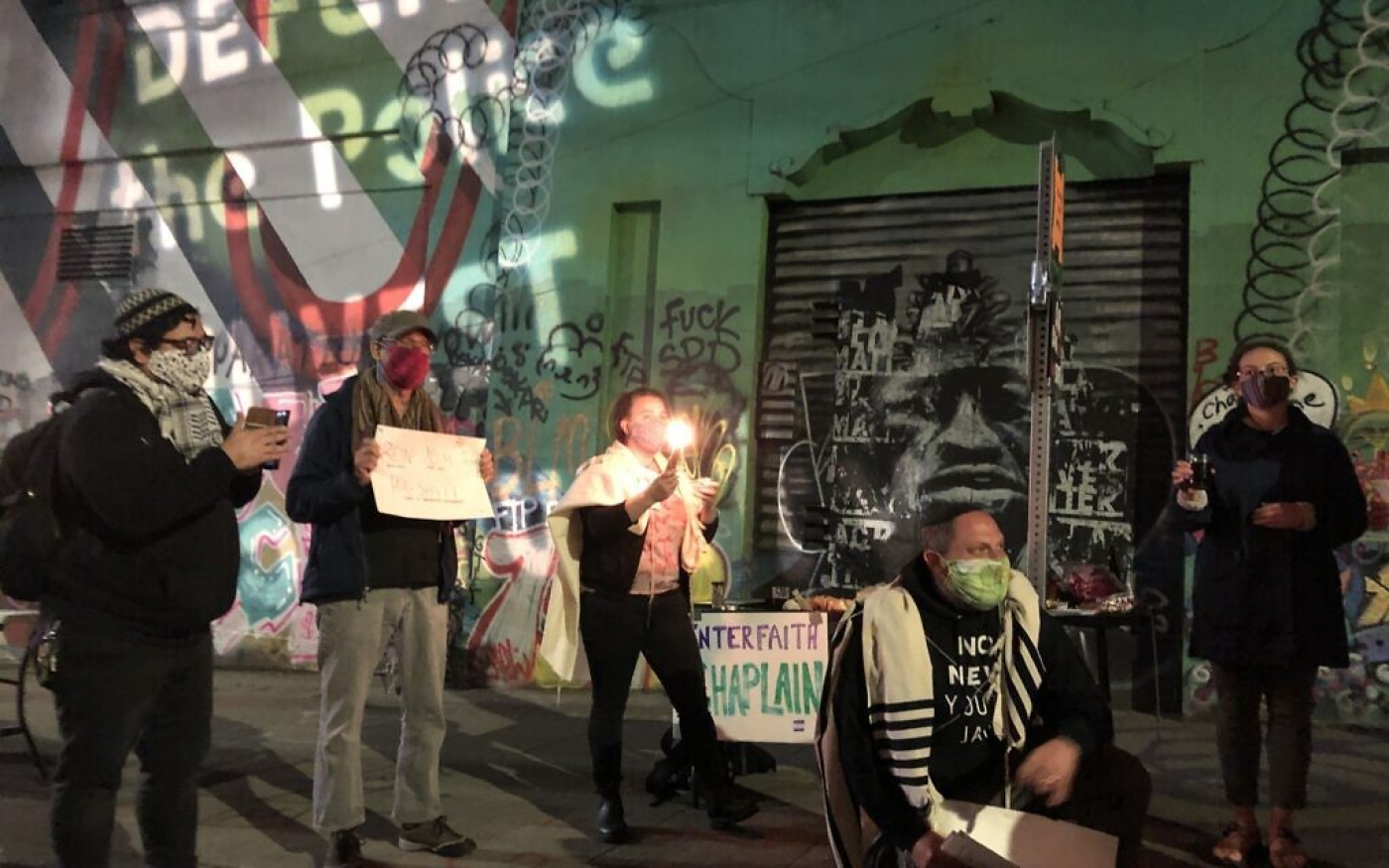 SEATTLE — On Sunday, June 7, a 31-year-old man attempted to drive his car into a crowd of protesters in Seattle’s Capitol Hill neighborhood. In the ensuing scuffle, he shot one protester before surrendering to police, who were stationed behind barricades in front of a precinct building that had become a protest flashpoint.

The traumatic experience was the culmination of a week of intense protests over the May 25 murder of George Floyd at the hands of a Minneapolis police office. It was a week that saw police deploy tear gas, pepper spray, and flash bangs on multiple nights in response to allegations of protesters throwing objects and police officers suffering injuries.

The next evening, the Seattle Police Department vacated the police precinct and protesters spontaneously began occupying the surrounding blocks. Local rabbis David Basior, Rachel Nussbaum, and Josh Weisman showed up alongside three Unitarian Universalist and two Christian clergy members. The octet set up a folding table and hung a sign declaring themselves an interfaith chaplaincy.

“I experienced curiosity about our presence,” Basior, the rabbi at Reconstructionist congregation Kadima, told The Times of Israel about that first night. “Someone came wanting a blessing. I asked a little about themselves and gave them a blessing. It was pretty ecumenical. They didn’t identify as Jewish and I didn’t ask.”

Several curious visitors have asked her what interfaith chaplaincy is. “There’s the mountaintop where the truth is and we have all these paths where they cross,” she says by way of response. “As we get closer to the mountaintop, they get narrower.”

After a weekend of of gun violence, Durkan on June 22 announced that it’s “time for people to go home.” She said the zone would be dismantled and the police precinct repopulated, but that force would not be used.

To divide sacred and profane

Kayla Jackson lives a few blocks away from CHOP and wandered over to check out the scene during its hectic first week. Amidst the murals, free food stalls, graffiti, makeshift memorials, community garden, conversation cafe, and speeches about systemic racism and the need to defund the police department, Jackson struck up a conversation with Rabbi Basior.

“We were talking about the desire for ritual in this time and the idea of having havdallah in the CHOP came up,” she said, referring to the post-Sabbath blessing ushering in the new week.

Basior put out the call for a physically distant, masked-up havdallah — the first in-person religious ritual he has conducted since the coronavirus pandemic began in March — on CHOP’s first Saturday night. Basior described this current moment in the CHOP as “the Era of the Statement,” with organizations left and right issuing press releases about their commitments to undoing racism. The havdallah ritual, he said, was a small effort in going from statement to action.

About a dozen people showed up for a proposed 10 p.m. havdallah — the sun sets late in mid-June in the Pacific Northwest — only to find Native American drumming underway in the middle of the street. 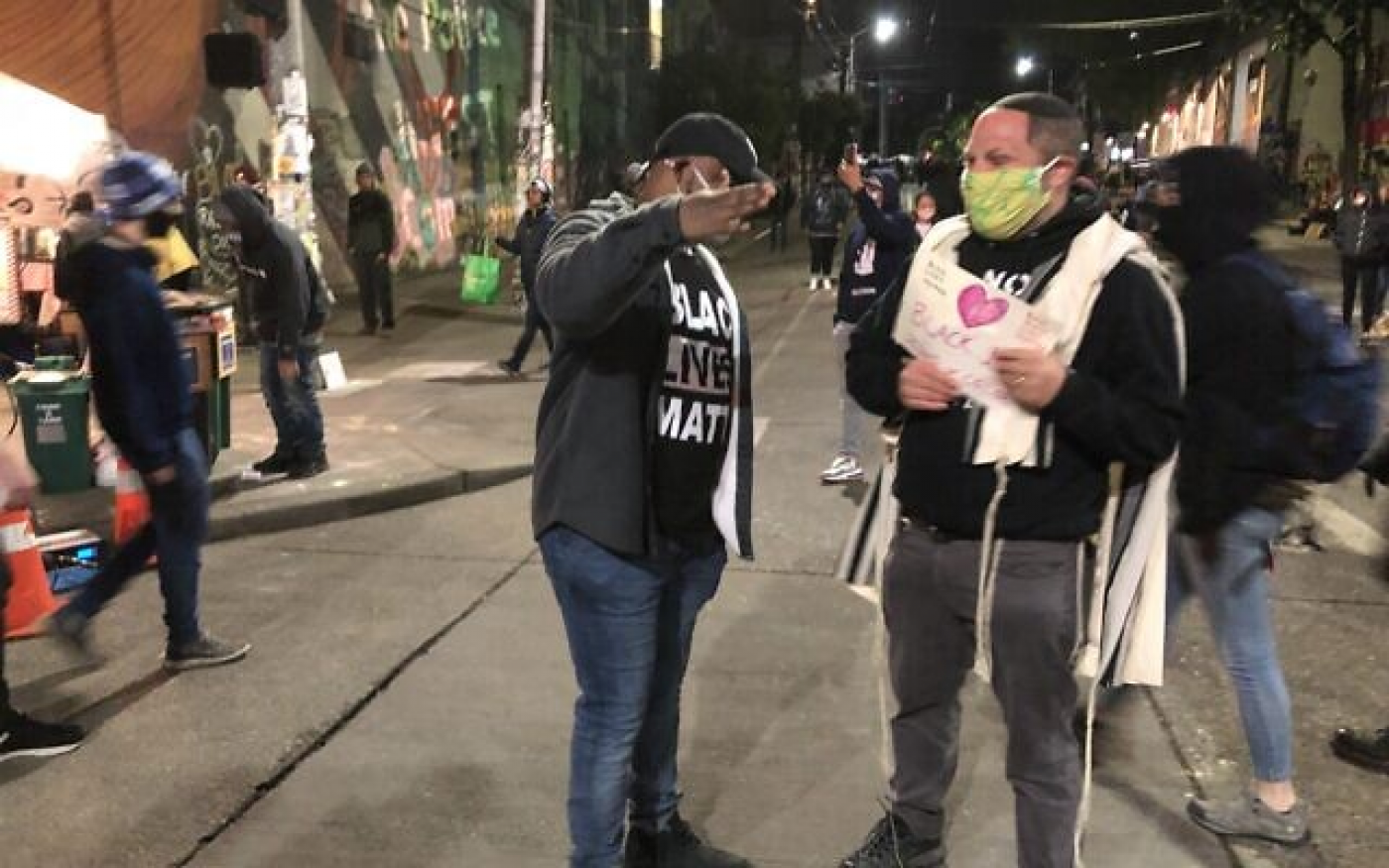 Rabbi David Basior is greeted by a stranger in the Capital Hill Autonomous Zone, June 13, 2020.

A dance circle soon enveloped the drummers and a Lakota acquaintance invited Basior in — much like he would invite a guest into a traditional Jewish hora dance circle, the rabbi later remarked. The two got to talking and Basior asked the man, whose ancestral lands are in the Dakotas, how to ask for permission from the Duwamish, the traditional inhabitants of the land where Seattle now sits, to conduct a ritual on their land.

The question came from an ongoing effort by Basior and congregants at Kadima to wrestle with their presence as a predominantly white Jewish congregation on indigenous land. It’s a quandary made more acute by the swirling debates inside CHAZ/CHOP.

“Isn’t the right thing to do to turn this occupied land over to the Duwamish tribe, otherwise are we not just settlers ourselves?” Basior told The Times of Israel, summarizing conversations during the protest’s first week. “That debate gave me a visceral feeling, a deeper appreciation that it really is Duwamish land. It’s a thing we’ve been saying and talking about for years.”

As the drum circle quieted down, the dozen-odd Jewish crowd gathered in their own small circle where Basior relayed the Lakota man’s response: Seattle Jews could make a specific offering at the Duwamish Longhouse, but in the immediate moment, those present should call on their Jewish ancestors to ask permission for safe passage from the Duwamish ancestors.

Rabbis Basior and Nussbaum held a havdallah ritual — livestreamed, as much of the protest has been — and concluded by offering up the moments following the prayer as an opportunity for any Black Jews or Jews of Color in attendance to speak if they so desired.

Jackson, who identifies as a mixed Black Jew, spoke up about the need for the predominantly white Jewish community in Seattle to do better to make ritual spaces feel more open and welcoming.

“It’s really cool to be in such a dynamic environment, but it also has its limitations,” Jackson told The Times of Israel several days later. “I didn’t want to educate white people in that moment when it’s supposed to be a space for healing.

“It’s frustrating to be in a group where it’s easier for white Jews to feel healing from rituals because they don’t have to think as much about the racial makeup of the space,” said Jackson.

I didn’t want to educate white people in that moment when it’s supposed to be a space for healing.

Basior acknowledges the fraught dynamics of the effort. “It felt like a risky experiment toward racial justice to put out there: I as a white rabbi wanted to host a space that had all intention of centering Black Jews and Jews of color, to create a space momentarily where they could have the mic,” he said. “But trying to do that basically meant me and my white female colleague leading the blessings.”

Jackson has lived in Seattle for three years after time spent in New Orleans and New York, where she took a fellowship with Avodah, a Jewish social justice organization. In recent months, she has found community online at Black Jewish Shabbats and Zoom calls with other Black Jews and Jews of color.

“I feel that we weren’t able to quickly gather a large group of Black Jews and Jews of color in Seattle to make this ritual truly centered on Black liberation and healing,” Jackson said. “But this havdallah was definitely a start.

As those assembled exhaled after the end of an exceedingly long week and prepared for the week ahead, Jackson left them with a reminder about what comes after the day of rest.

“You have six days of work ahead of you,” Jackson said. “What are white Jews going to do to make sure Jews of color feel comfortable in these spaces and don’t have to justify being Jewish enough?”